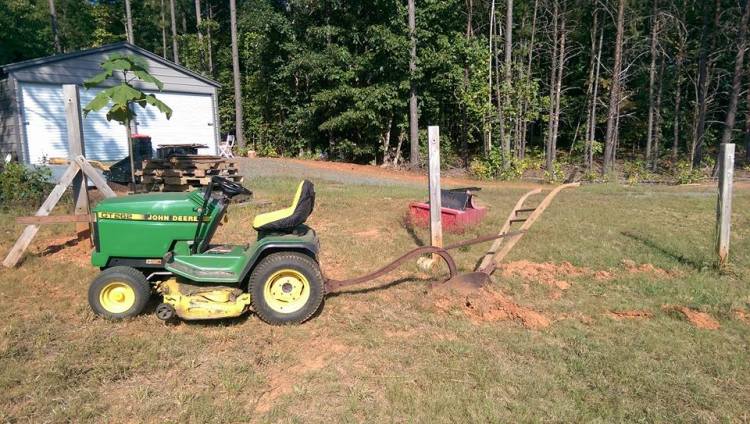 Not long after we moved to Virginia, my cousin passed down a couple of tools from my great, great grandfather. One was his pitchfork – over a hundred years old with the original handle and his initials carved into it – still as strong and as useful as ever. The second was his plow. Farming in the days before tractor use was widespread, his one horse plow was his primary tillage tool on the farm. It had been sitting in my cousin’s barn for many, many years.

Ever the user and restorer of old tools, Bones was sure we could hitch it to our riding mower and use it to break some new ground in our field. I was skeptical, to say the least. Neither of us had ever plowed a field, much less used a walking, horse drawn plow. We actually had to ask google how to properly plow a field.

Armed with our google degree on plowing, we hitched up the plow. Bones has a bit more upper body strength than I, so we decided she would walk the plow and I would drive the mower. I put the mower in first gear and began to inch forward. The plow skimmed the surface and barely overturned a single blade of grass. Bones tried every which way to get the plow to dig into the earth to no avail. Finally we used a shovel to dig a starter hole. After that we were off. And boy were we ever off, no straight furrows in sight!

I decided to take a turn walking behind the plow. It is no easy task. The amount of strength needed to maintain a straight line and exert enough downward pressure to ensure the plowshare digs in was much greater than I could manage. I turned the plow back over to Bones and we finshed the designated area. I’m not sure we did any good. The furrow depth was terribly inconsistent with some areas only barely skimmed. And we missed large swaths of sod that didn’t get turned at all. After posting a picture of our plowing adventure on Facebook, a neighbor volunteered to bring his real tractor over to turn the field for us.

I imagine my great, great grandfather was rolling on the floors of heaven laughing at our exploits with his plow. It was certainly a memorable moment in our farming journey!